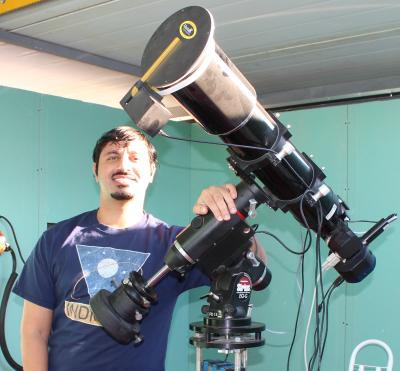 I have always been passionate about Astronomy since I was a child. I remember my grandmother gave my sister and I some allowance money, and I used it to buy my first ever astronomy book instead of candy: it was an Arabic book about the solar system and it was quite thrilling to flip through the illustrated pages over and over again. What terrified me though was an image of a frozen earth in the distant future after our sun dies, and even though the description clearly stated this won't happen for a few billion years, it still scared me out right. But what really peaked my interest in Astronomy a decade later (1997) was Carl Sagan's Contact. After watching the movie, I read the book, and I felt that this movie was the most romantic film I have ever seen as the romance is science is truely unparalleled.

When I was doing my degree in Computer Engineering at the University of Kansas (2000-2004), I decided to minor in Astronomy in my sophomore year. More importantly, this is where I first got involved in Linux and Open Source software, a step that have shaped my life ever since. In 2001, I started submitting trivial patches to KStars until later I became a full time developer, and currently I am the maintainer of KStars for the last couple of years. KStars is a desktop planetarium with many features suitable for beginner and advanced users. During the first two years in Kansas, my mountain bike was my primary mean of transportation and it remained so until I aquired my first telescope: A Meade LX-90. Since I needed to escape the city light pollution to darker sites, I decided to buy the most expensnve telescope acceessory: a car! With my car, I was able to haul my telescope and mount to nearby dark skies and observe the wonders in the heavens.

In 2003, I started to develop a library to control Meade telescopes from KStars and I developed a preliminary package called KTelescope that implemented most of the LX200 command set. Elwood Downey, the author of the venerable Xephem, approached me and suggested I utilize his newly incepted INDI protocol. Since then, I was part of the INDI project working with Elwood and a growing team of volunteers to improve it and expand its capabilities. Since 2005, I lead the development of INDI Library with the aid of numerous volunteer world wide. I am responsible for the core development of INDI library, INDI Development manual, INDI website, articles, tutorials, and distribution of INDI via source and binary formats. Over the last decade, I developed many drivers including LX200, Celestron, Astrophysics, FLI, SBIG, QSI, GPhoto, Apogee, and V4L2 drivers in addition to several filter wheels, focusers, and auxiliary drivers.

I am also an active member of the Kuwait Science Club Department of Astronomy and Space Sciences, and constructed Kuwait National Radio Observatory, a 5 meter educational radio dish designed to detect and map the distribution of hydrogen clouds in the Milky Way and to measure rotational velocity curves as a function of distance from the galactic center. Furthermore, I worked on AlUjari Observatory automation from the ground up using KStars and INDI. The observatory old control system was removed and replaced with modern solid state AC and DC drives to control the dome and fork-mounted twin-telescopes motors which were outfitted with absolute multi-turn encoders to achieve high GOTO accuracy and precision.

While INDI is monumental in driving astronomical instrumentation, a higher level layer to manage the complete observatory in addition to perform common astrophotography routines was missing in Linux. Hence, I started the development of Ekos in 2013. Since then Ekos has grown to become the swiss knife of astrophotogrpahy and observatory automation. I am still actively maintaining INDI, Ekos, and KStars which now power a number of observatories world wide and enjoys an active avid community of developers and volunteers in all corners of the world.

My latest project is Ikarus Observatory, my very own home observatory built on the same technologies I worked very hard on for the last decade. In addition to capturing amazing pictures of the heavens, I plan to utilize the observatory to perform science-oriented objectives in the near future. Furthermore, robotic control of the observatory shall be made available to the public via a simple web interface.

Besides Astronomy and Programming, I am a hardcore PC gamer, avid reader of sci-fi and fantasy fiction, enjoy occasional hiking and biking, and spending a lot time with my two lovely companions: Juli und Tommy! 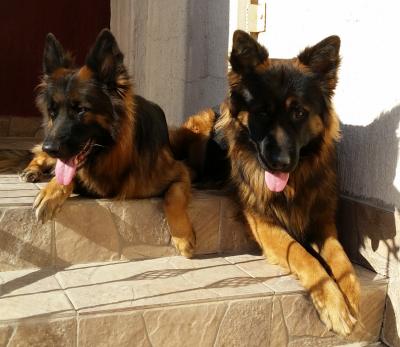 Ikarus Observatory is located in AlSabahiya, Kuwait. Robotic control is publicly available and free of charge